These self-serve, automated pick-up stations are the first of their kind in a major league stadium or sporting venue and allow fans to skip the concession lines and spend more time enjoying the game by ordering and paying for food and beverages using the official MLB.com Ballpark app.

“Reds fans can now enjoy the convenience of mobile ordering and no-wait pick up…(they) will quickly embrace Ballpark Express as an option to bypass concession lines.” 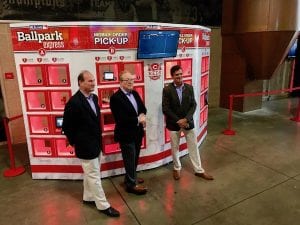 The Reds along with Major League Baseball Advanced Media and Delaware North are previewing this new technology for the remainder of the 2017 season, with a full launch of Ballpark Express happening in the 2018 season.

“Thanks to the collaboration between these great partners, Reds fans can now enjoy the convenience of mobile ordering and no-wait pick up at the ballpark,” said Phil Castellini, Chief Operating Officer of the Cincinnati Reds. “It is easy to use and we believe fans will quickly embrace Ballpark Express as an option to bypass concession lines.”

The preview includes two Ballpark Express pick-up stations on the third base Terrace Level concourse of the ballpark. Using the free MLB.com Ballpark app, fans can place their Ballpark Express order from anywhere in the ballpark and will be notified by the app when the order is ready. A barcode is sent to their phone that will access the door to the secure compartment containing the freshly-made order. Concession employees fill the orders using special packaging designed by Delaware North to separate and insulate hot and cold items.

Concession items available to order include hot dogs, brats, metts and pulled pork sandwiches plus other ballpark fare from the Porkopolis concession stand along with a variety of craft and domestic beers including Budweiser from the Reds Brewery District. The complete list of food and beverages are listed on the Ballpark App.

“We are continuously working to improve the fan experience,” said Carlos Bernal, president of Delaware North Sportservice. “The Cincinnati Reds are forward-thinking partners who encourage innovative thinking and work with us to bring the newest technology to their fans.”

“Nobody likes to wait in line, especially during a game,” says Kent Savage, Apex Supply Chain Technologies founder and CEO. “That’s why we’re so excited to have worked with two innovative, fan-focused organizations like Delaware North and the Cincinnati Reds to develop the Ballpark Express. It definitely sets the new standard for elevated fan convenience.”

Delaware North is one of the largest, privately-held hospitality companies in the world. Founded and owned by the Jacobs family since 1915, Delaware North has global operations at high-profile places such as sports and entertainment venues, national and state parks, destination resorts and restaurants, airports, and regional casinos. Our 55,000 employee associates are dedicated to creating special experiences one guest at a time in serving more than half-billion guests annually. Learn more about Delaware North, a global leader in hospitality and foodservice, at www.delawarenorth.com.

Apex Supply Chain Technologies is the world’s leading provider of automated dispensing solutions for use in a variety of applications and industries, including food service, QSRs and fast-casual restaurants. Our devices bring the benefits of self-serve automation to some of the biggest brands in the world. With world headquarters in Mason, Ohio, Apex has offices in Australia, France, Germany, Poland, the UK and Latin America. To learn more about Apex, visit us online at our website on LinkedIn or on Twitter.

Any cookies that may not be particularly necessary for the website to function and is used specifically to collect user personal data via analytics, ads, other embedded contents are termed as non-necessary cookies. It is mandatory to procure user consent prior to running these cookies on your website.

Please fill out the form below to download your spec sheet